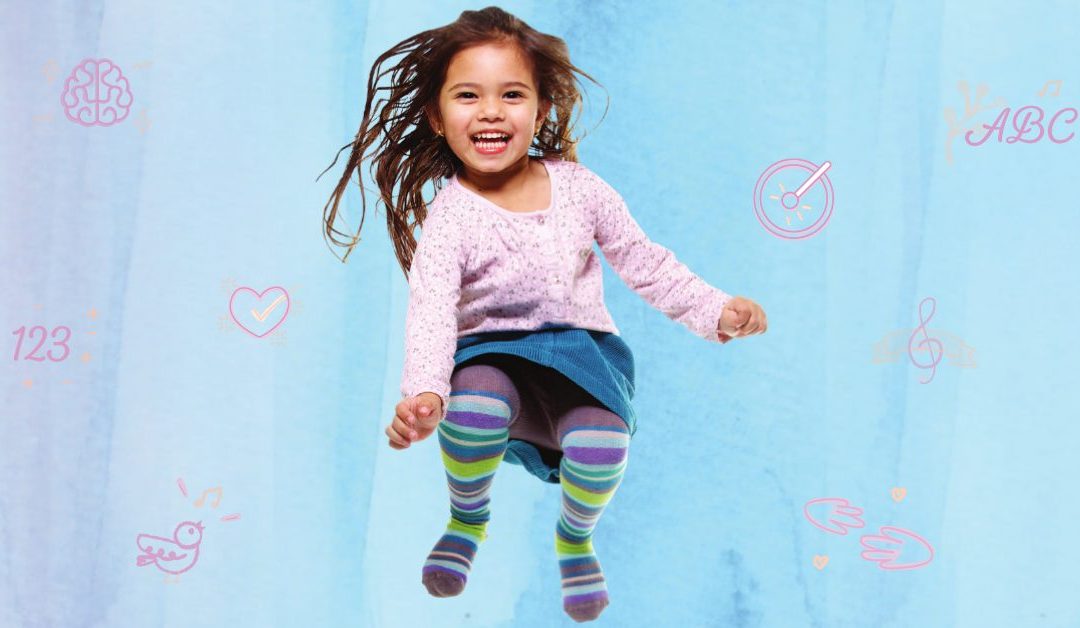 Music is a fundamental part of being human. Certain songs can evoke memories, moods and emotions, and there’s something almost magical about making music with others. The feeling of connectedness we get from singing to our babies, dancing with friends, singing along with our favourite artist at a live gig or performing in a choir is powerful. Active engagement in music making (as opposed to passive consumption) is particularly important in the first five years of a child’s life for a myriad of reasons.

There is a direct correlation between singing and the development of language. By singing, and by being sung to, children naturally learn how to put vowels, consonants, words and sentences together. Children will often ask for the same song to be sung again (and again, and again!) because they thrive on repetition and predictability. This repetition leads to retention, and lines from children’s songs therefore often end up being a child’s first fully structured sentence.

Singing also allows for precise practice of the formation of words, because the words of songs are sung at a slower pace than conversational speech. For example, recite, “Humpty Dumpty sat on a wall,” at the same pace that you would sing it, then try to say “Hello, I’m pleased to meet you,”at the same pace. It just doesn’t work! Children are developing their language skills when they slowly perform short, simple children’s songs again and again.

Music making offers countless opportunities for connection between responsive caregivers and young children. Song is a unique way of connecting and communicating, and it carries with it benefits for both the singer and the listener. Many wonderful things happen when a child is sung to. Songs can be used for storytelling, cultural exchange, to calm, to excite and to incite discussion. For the singer, the act of singing increases cardiovascular function, lowers blood pressure, releases endorphins and lowers stress levels, with consequent increase in immune function.

Singing to babies is particularly powerful. All positive caregiver-baby interaction leads to the release of beta endorphins for both, promoting feelings of well-being and increased relaxation, and this is especially true for when a baby is being held and sung to.

Carefully selected, age-appropriate music for children can ignite the brain, and the imagination. When children hear a song that they love, they engage with the story held within it. Often children can be supported in acting out the song, making it a fully immersive experience. Most of the time this can be done without the support of props, costumes or pictures, and using only bodies and our voices. This provides a rich imaginative experience for the children.

One of the fantastic things about music for children is the way it naturally contains patterns, with lots of rhyme and repetition. These embedded patterns mean that children (and grown ups) can recall them more easily and memorise quickly. Nursery rhymes in particular are often structured so that they tell a story, with a clear beginning, middle and end. Because they are short and quite simple they allow the youngest of children to be engaged in the story, and to understand what is going on. This structure also helps children to understand the concept of events happening in sequence.

Music is made up of patterns and sequences, and so it is very closely related to the development of numeracy. In music, rhythm refers to the pattern the words make and relates to how the beat is divided. The rhythmical, repetitive nature of children’s songs and rhymes offers opportunities to experience this innately, by, for example, saying a rhyme and bouncing or clapping on the beat. Many children’s songs are based on simple addition and subtraction. These particular songs and rhymes are often accompanied by fingerplays that reinforce the numeric concepts being subconsciously explored. Songs that explore concepts of fast and slow or big and small are also supporting children’s developing understanding of numeracy.

Children’s songs are often accompanied by actions. Some of these actions will involve whole-body, gross motor movement, and others will involve fine motor movements such as wiggling fingers one at a time. When children move their whole bodies while engaging in music making they are more likely to comprehend and interpret the words, sentences and phrases used (particularly when the movements reflect the meaning of the words) and retain information. Using whole bodies also helps children to develop their strength, co-ordination, body awareness and balance.

When children are engaging in music making, they are completely unaware that any of this amazing growth and development is taking place. They are simply making music for the joy of it. All of these benefits of music making are wonderful, but the most important part of engaging in music with children is the fostering of a lifelong love of music. The best way for children to engage in music making is with others, and without any backing tracks or videos. For young children, the unaccompanied voice is the safest and most familiar sound and is far better than any recorded music. Just as children learn language in interactive environments by being engaged in live conversation, they will gain the most benefit from being sung to directly, and by making music together.

Jen Teh is a music teacher, conductor and clinician who believes strongly that music and singing should be a part of every child’s life.